“Can I be Rosa Parks this time?” said the little girl taking a self-issued timeout.

“We’re doing something else this time,” I whispered, trying not to interrupt my daughter’s first-grade class or her teacher.

“I want to be Rosa Parks,” she declared again.

“Good morning, Sunflowers. What language do you want to say hello in this morning,” Ms. Anne cut in over the little girl’s whining. 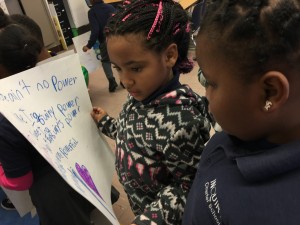 “Chhhiiiiineeeeeeeeesssseeee,” the class responded in a frenzied unison.

“Nǐ hǎo Jalen, nǐ hǎo Amour, nǐ hǎo Jen,” they sang around the circle to the beat of Ms. Anne’s ukulele and a bongo drum.

“Today, Jen’s mom is going to be sharing with us again,” Ms. Anne explained to the group.

“I know,” said a sassy girl with lots of ponytails. “We are going to talk about MARTIN IN THE KING JUNIOR.”

I really love my daughter’s teacher. I go to her classroom just to watch and learn. She’s a master at her work. A few months ago our relationship evolved. I asked her how she was having conversations about Tamir Rice and Mizzou and #BLACKLIVESMATTER in her classroom. I was having them at home in the best ways that I knew how– Well Tamir Rice was a little boy who… Well, Trayvon Martin is a teenager who… Well, Mizzou is a school where…

Me and Ms. Anne–we have collaborated on two projects this school year. In December, we discussed Rosa Parks. And not just the same ole’ recycled story about Rosa Parks, but instead we focused on her work as an organizer and the ways that she is represented. How do you stand up for what’s right when you are 7 years old? Well, you remember that though she chose to say no that day on the bus, she was not alone. And when they boycotted it was because they knew that together they were stronger than apart. Then we acted out a play where they had the chance to practice saying no to the “bus driver” and boycotting—together. 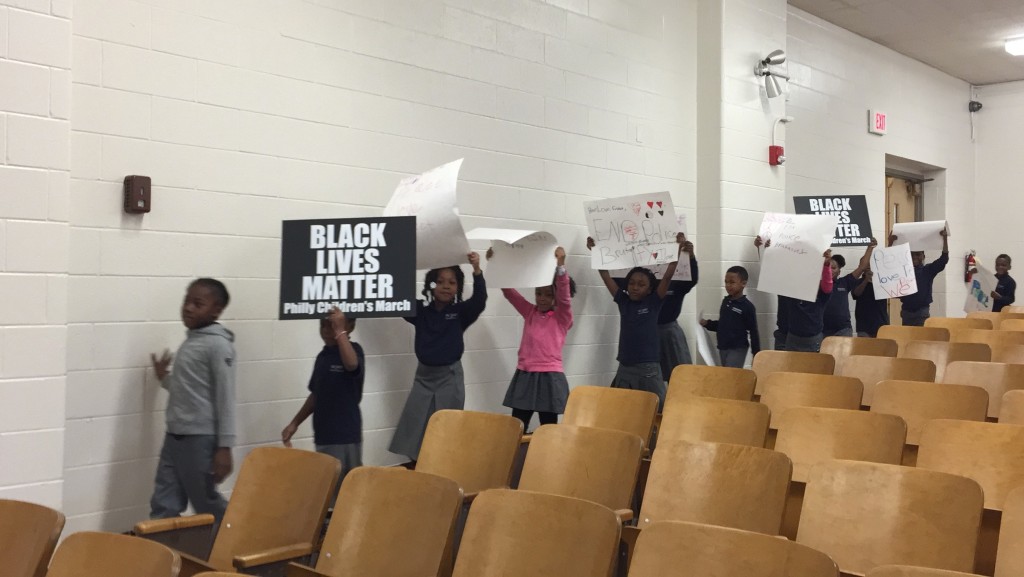 “No, I’m not giving up my seat, I stand for what’s right,” my daughter said to me a few days after that Rosa Parks lesson.

This week, in observance of MLK Day, Ms. Anne and I teamed up to talk to the group about marching and using our voices to declare peace, love, and respect for everyone. Again Ms. Anne and I decided to take the nontraditional route. The Sunflowers learned to define words like social justice and protest and speech. We took turns looking at historical and contemporary images of children’s marches and protests–including the Philly Children’s March and the Birmingham Children’s Crusade. We practiced chanting and standing up in front of the school to share what we decided was important. Then the group participated in their own non-violent social action, the More Justice March, by making signs and marching into the school’s morning meeting declaring in call and response— 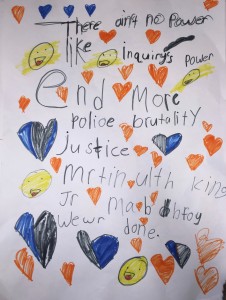 “Love. Respect for everyone.”

At the morning, my daughter did as she had planned. She shared what she stood for and what she stood against. She came up with the words that she wanted to say on her own. I provided two prompts.

“I am against police brutality, violence, and hurting people.”

“What do you stand for…”

“I stand for peace, love, and respect for everyone. Now follow me.”

Then Jen handed the microphone to Ms. Anne and led the group in the accompanied sign language. Jennifer Bradley from Philly Children’s March attended and took photos. This ritual is one that was passed on to me by elders (Nancy/Heather/James/Arthur/Nia/Baba Chuck/Mama Linda/Clarence/Jowole).

Now Jen is doing it.

“How did the march and your speech make you feel.”

“Strong and powerful, said Jen showing her muscles. “I told you that I would let you know if anything was crazy or terrible and it wasn’t. It was good Mom,”she smiled.