Even in the midst of the weekend’s wintry mix, an estimated 100 people turned out in Mt. Airy to raise their voices in support of the “Black Lives Matter” movement on Saturday.

The march was conceived as a response to the tragic killings of Trayvon Martin, Michael Brown, Eric Garner, Tamir Rice and far too many others. The idea for a local children’s march emerged after I attended some recent protests in Philadelphia and Washington, D.C. with my children. 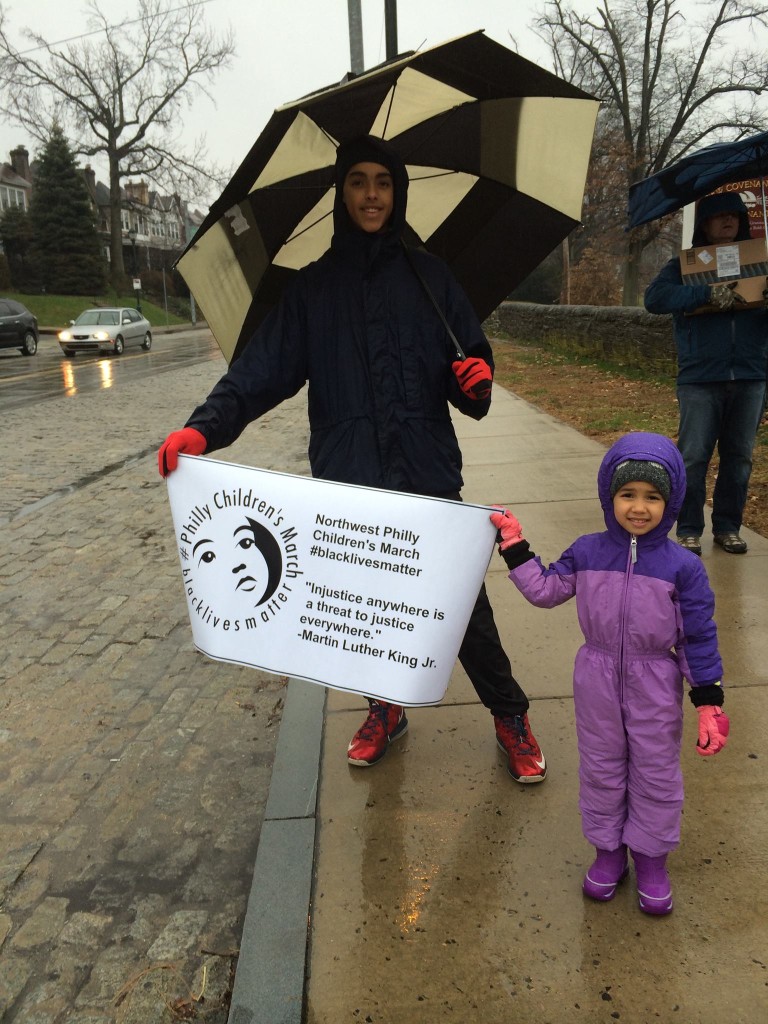 The marchers stretched in one long line along Germantown Avenue on Saturday, marching through the rain from the New Covenant campus to the Mt. Airy (and then Pleasant) playgrounds. There were adult allies, parents, babies in slings, toddlers in strollers, preschoolers, kids in grade school, teens, college students and at least one 72-year-old grandfather in the group.

The Civic Affairs division of the Philadelphia Police offered the marchers route safety in a wonderfully child-friendly way. This was especially moving, given that the march’s call to justice is centered around police killing of unarmed black men.

Aisha Anderson-Oberman found this helpful for her 7-year-old son, Gyasi. “It was great for him seeing the officers help us on our march route, because he has had a lot of trouble understanding why he shouldn’t be afraid of all cops.”

Children and adults alike held up powerful signs, both with the words familiar to the movement: “Black Lives Matter” and “I can’t breathe until there is justice”, and with their own words about why they were marching: “I march for Tamir Rice.” “We need more peace.” “I want police to be fair.” 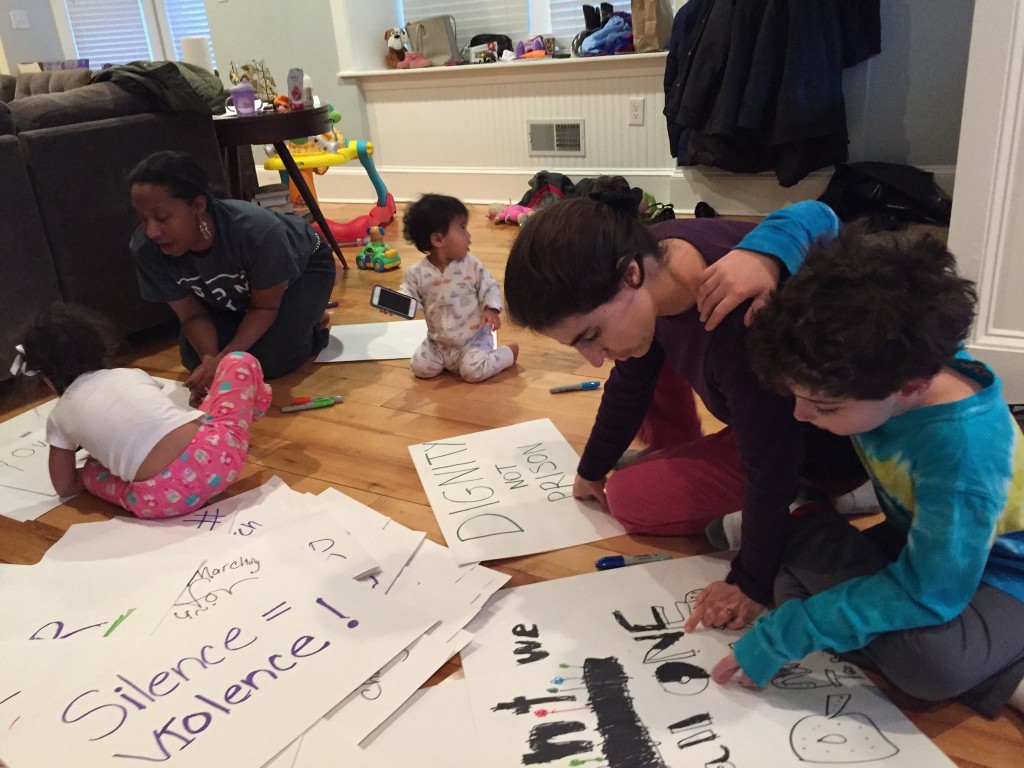 Seven-year-old Tani Nevins-Klein pulled the sound-system wagon along the entire route, and Barbara Ballenger shared the mic with children and adults to lead change along the way. The most chanted words of the afternoon were a call-and-response, “Black Lives Matter! Love and Justice!” 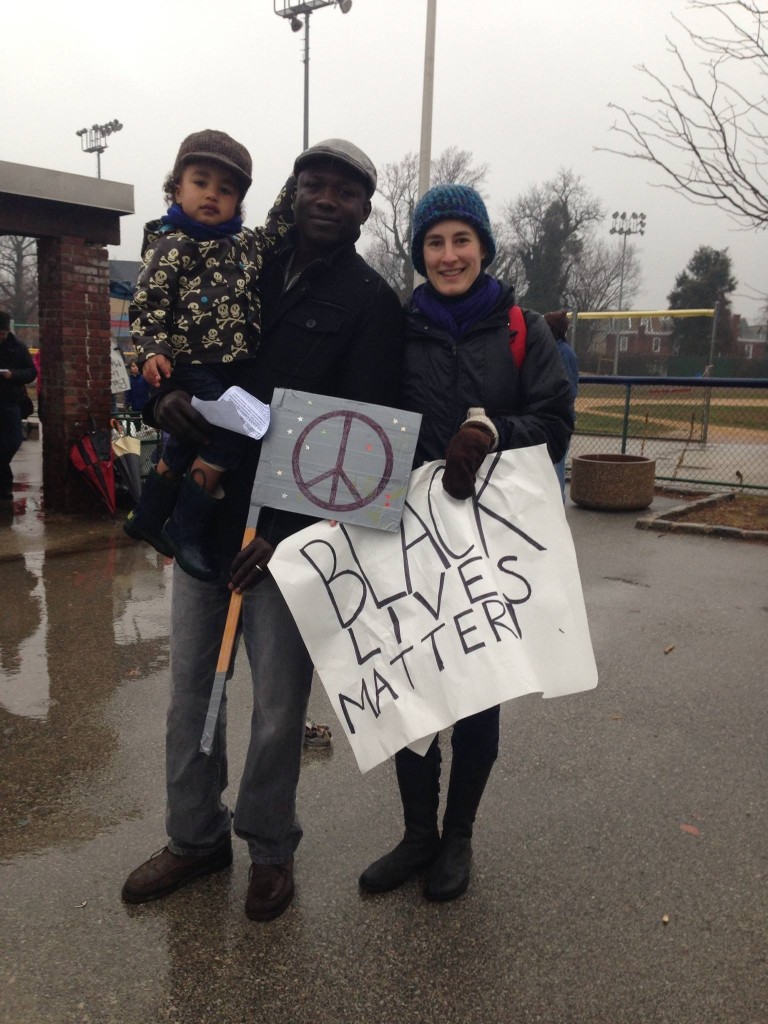 Andrea Myers marched with her daughter Ava alongside Tia Rice Mathisen and her daughter, Reece. Tia noted that, “My 4 year old was very eager to lead the ‘Black Lives Matter’ chant, which was surprising to me. I didn’t expect her to be so bold in an unknown setting.”

The group was racially diverse, and many reported that people of all colors marching together in support of racial justice was the most powerful part of the march.

Although there is no official count, at one point the line of marchers stopped traffic and spanned an entire block along the sidewalk of Germantown Avenue. To the children’s delight, many cars passing by offered beeps and honks in support of the cause. 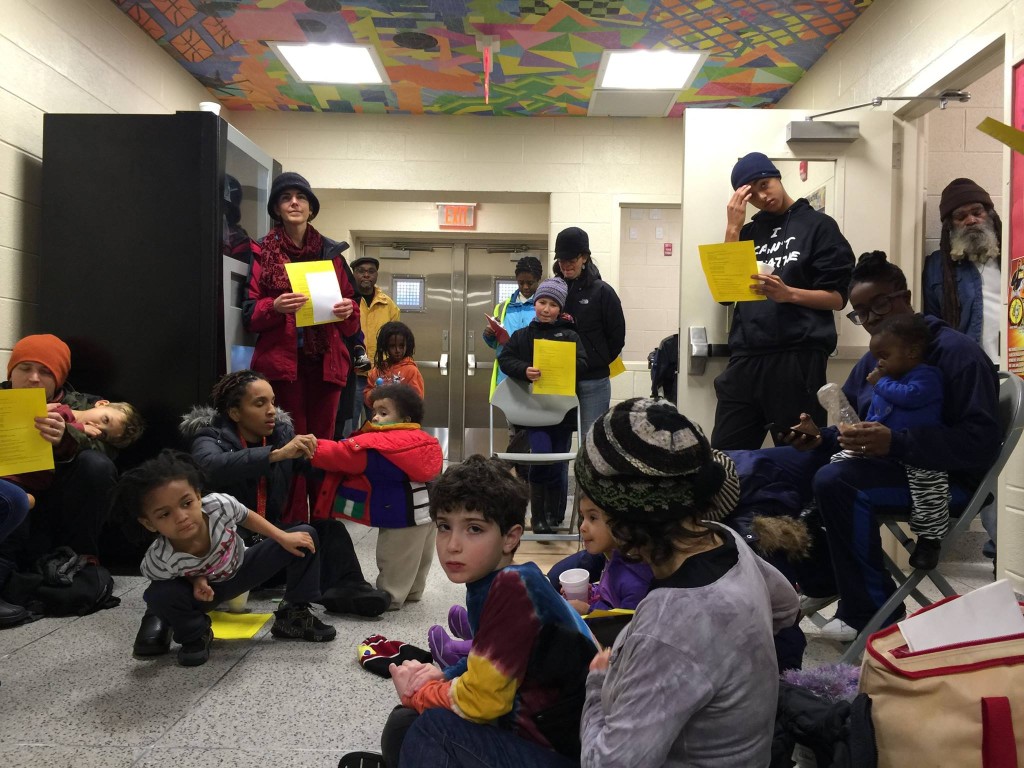 Due to weather, a brief sing-in was held at the official march endpoint, the Mt. Airy Playground. Charles Ombam, a Kenyan performer, led the group with drums and the singing of “Funga Alafia,” and David Basior offered a blessing and challot as a way for families to bring their own identities to the group while breaking bread together. 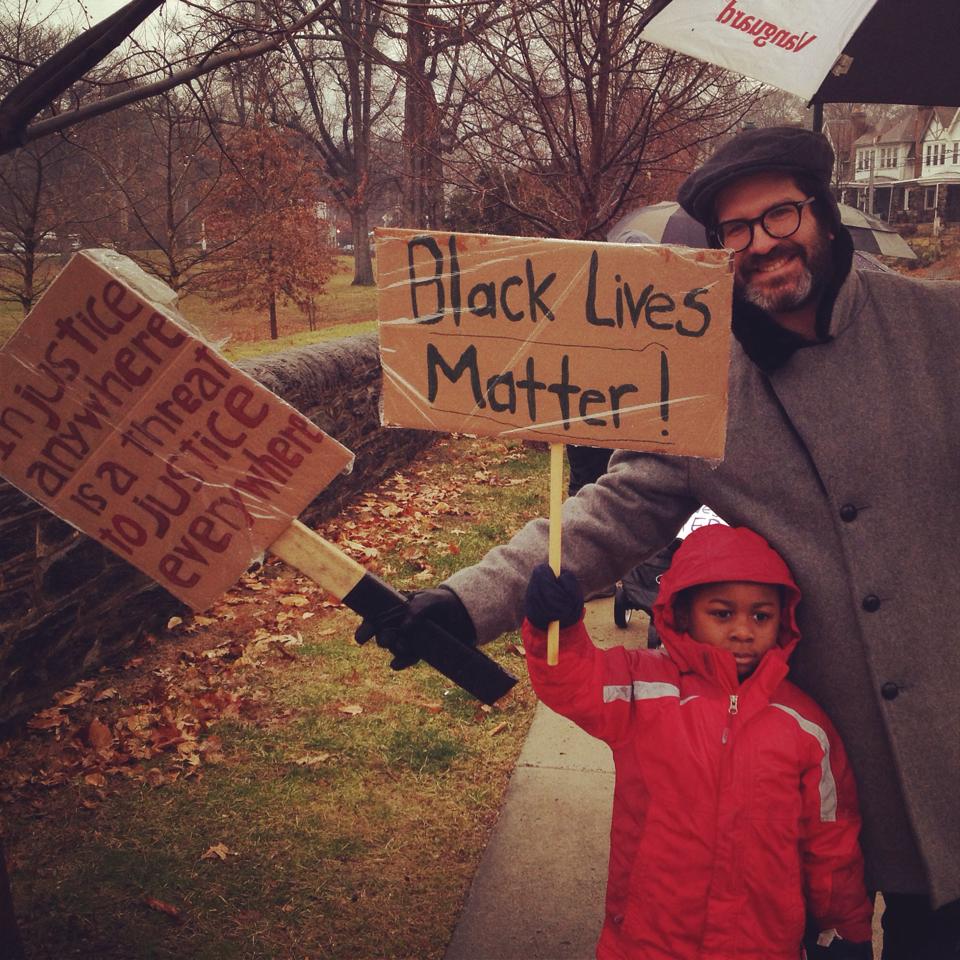 Many families continued their march for three more blocks to move indoors. Once inside, in addition to warm drinks, more songs and chants were shared. Roberta Frempong spoke to children about what unfairness is and energized the crowd with a chant for “MORE Justice! MORE Peace! MORE Love! From ME!”

Rabbi Melissa Klein invited all children and adults present to introduce themselves to the group, and Chana Rothman, local musician and educator, led the group in singing “We Shall Overcome,” and “Peace, Salaam Shalom.”

The New Covenant Campus generously offered their grounds as a gathering space before the march. Miquon School staff provided materials, volunteers, and networking help. Mt. Airy Read and Eat and The Trolley Car Diner both provided hot chocolate, and the Pleasant Playground provided indoor space for the sing-in at the end. It was truly a community event.

Debrief and next steps

At the very end of the indoor sing-in, an older gentleman raised his hand and asked, “What about the dialogue? When does that happen?” We brought his question back for a debrief and discussion on Facebook about what the next steps might be for this committed group of families.