PCM was invited over to the Henry C. Lea Elementary School, in Walnut Hill on Thursday, May 24th to assist a 7th grade class in making posters and preparing chants for a march that they are planning to have next week. The subject of protest for the class was addressing gun violence in their communities and confronting loose legislation that allowed easy access to guns for many people. 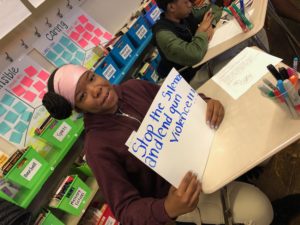 PCM steering group members Andrea Myers and Jennifer Bradley, Sam Gerlach and two of the PCM summer interns worked with students at different poster-making and chant-making “stations” around the classroom. In small rotating groups, students worked with PCM members to to think about how they would be verbally and visually expressing their protest. Students produced messages like “Stop the silence. End Gun Violence.” and “Help me help you stop gun violence. Hands up, don’t shoot. Stop gun violence.” focusing both on community members’ and the State’s role in perpetuating gun violence in their communities. 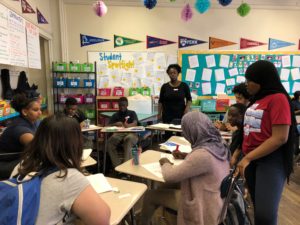 In the context of a national conversation around the alarming frequency of school shootings (and other mass shootings) around the country, many students like those at Lea have been speaking out with a particular concern about how easily they might be exposed to the same violence in their own school communities. For the school community at Lea, however, the conversation also had to focus on the the gun violence that exists in their community otherwise. A conversation about gun violence, for them, had to take into account the dangers that they might be exposed to both inside the classroom and outside in their community. 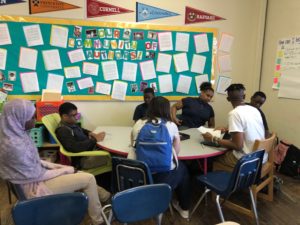 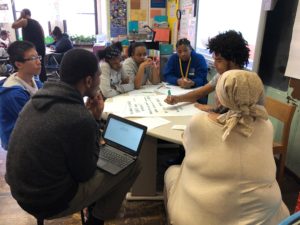 In the midst of the poster-making and chant-making about calling for this commitment from community members, a student in one of the groups proposed the question: If we put down our guns, will the police put down theirs? While most institutional learning environments might discourage a question like this from a student, characterizing it as unnecessary dissent and an unwillingness to cooperate, we were very glad to hear the question posed. There is all too often a narrative that is circulated and reinforced, placing all the blame on Black and Brown folks for the violence they experience in their communities. In conversations about “putting an end to gun violence,” we very often do not pay attention to the gun violence that is introduced and perpetuated in police brutality and racially unjust policing of the Black body. 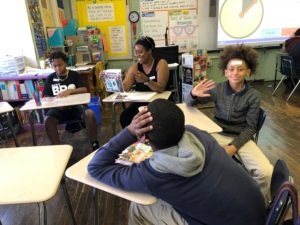 Going even further, these narratives often remove the blame from government officials, corporations, and law enforcement for the ways in which they contribute to circumstances that perpetuate violence in Black communities. They often ignore the root causes of community violence, put a focus on punishment and control, and offer quick fixes to problems that require deeper care, attention, and analysis. Therefore, in a conversation about gun violence, it is important to ask questions like this student did. While communities pledge to work toward peace and justice in their personal lives, will law enforcement and others in power work to bring it about systemically? 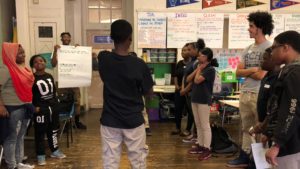 What questions are you asking? How about your children? How can you think more systemically about fighting for racial justice?