On Thursday, May 31, 2018, 7th graders from Henry C. Lea Elementary School marched in their West Philadelphia community against gun violence. The march began at 1:30 pm in front of their school’s beautiful playground. As the students walked, a few younger children from the playground approached the gate to cheer the students on. 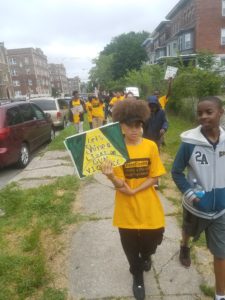 The students and their teachers and staff members donned yellow shirts from CeaseFire PA, one of a few parties that organized the march and provided information on the issue to students. They held signs: “No Justice No Peace,” “Black Lives Matter,” and others displaying data about gun-related deaths in Philly and in the US more broadly. Teachers handed out waters and pamphlets as they marched to the local Malcolm X Park.

Sam Gerlach from Philly Children’s Movement was leading the kids in chants, both some of their own creation and some that came from other people. Members from the community voiced their support in many ways. Some cheered them on as they themselves crossed the street. Drivers in cars passing by honked. 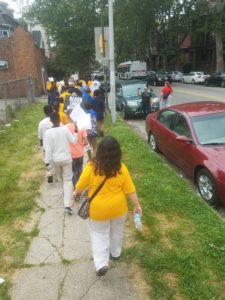 Once we arrived to the main event at Malcolm X Park, students took to the benches to address the crowd of teachers, students, and supporters. Students stood on and in front of benches holding the pledge they all signed to work towards ending gun violence.

Students read poetry and speeches. They talked about the need for responsible gun-control laws like stricter background checks, and policies for reporting lost or stolen firearms (which does not exist in PA). They talked about self-harm and suicide, and how guns are a major component statistically.

Sam then led them in a call-and-response chant that was created by students at Powell, whom PCM worked with a couple years ago:

Several adult speakers were called to the middle.

A pastor from local universities called on the wider community to recognize and support marginalized folks who are often unjustly targeted and slain due to gun violence: transgender and nonbinary people, and African American men. He called for an end to #ThoughtsandPrayers as the common response to gun-related tragedies, and pushed for more than just prayer. Policy and action. 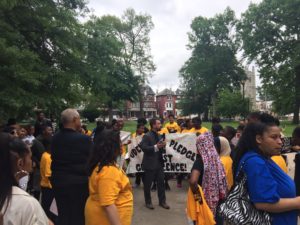 A representative from CeaseFire PA went up. She congratulated the students for organizing this march, and encouraged them to continue this work. She said that students like them were CeaseFire PA’s biggest and most powerful weapon in combatting this issue and putting pressure on local government representatives to put their policy where their platforms are.

The school’s children and family counselor went to the middle. He began reading off the students sign. Over 300 people die daily from guns in the U.S. Guns were used in a large percentage of suicides. Over 80% of homicides in Philly involved a gun.

Finally, local state senator Anthony H. Williams went to the middle and brought up a student from the school with him. He praised her and her fellow students for being leaders at such a young age, and said that he would follow and help convince others in the government to follow their lead. For him, it’s important to not only recognize the harm done in suburban white schools, but also the violence committed against black and brown kids in urban schools and neighborhoods.

The students led everyone back out of the park and towards the school. Once we reached it, the kids chanted. 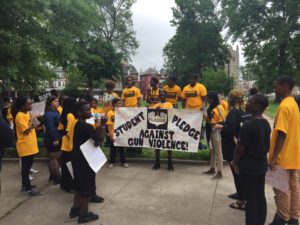 Their final chant before heading inside and ending the school day was created by a student just a week prior to the march during one of the chant-making sessions. He posed this thoughtful question: “If we put down our guns, will the cops put down theirs?” adding another layer to the talks surrounding gun violence.

“If we put down our guns, will the cops put down theirs?”