In July, PCM’s Maleka Diggs, along with the help and co-hosting of Germantown natives and artists Ursula Rucker and Miles Orion, put together a series of poetry workshops for the community. On July 15, 22, and 25, they held “Breaking Bread for Racial Justice” (BB4RJ) for adults, teens and families respectively. The purpose of these BB4RJ workshops was to get a group of people from Northwest Philly to discuss race and particular issues in and of their community.

The three hosts were joined by a tight-knit group of adults on the first day, a smaller group of teens on the second day, and a room full of adults, kids, and families on the final day of the series. As everyone shuffled in, there were greetings, banter, laughter, and just a general comfort. Maleka led us all in an ice breaker where we wrote about things that brought us joy. Then, we had a “snowball fight” with our pieces of paper, and read the new ones we had picked up aloud. Again, there was that comfort.

But this comfort was exactly what Ursula and Miles sought to disrupt. In an introduction to the activities of the day, Ursula mentioned the importance of being uncomfortable and being honest when talking about race.

The prompts varied for this middle section of the workshops. For the adults session, Ursula tasked us with writing about what would happen if race were dead. How would we respond? Where would we be when we heard?

For the families session, Maleka challenged us to write something honest about race. Many responses revolved around how their family members — children especially — helped them rethink and reimagine race. For an area like Northwest Philly, where there are many multiracial and transracial families, this was especially relevant.

The culminating activity for each session was to create a song together from the poems, journal entries, prose pieces, and musical pieces we wrote. Miles helped with musical accompaniment, and Ursula harmonized for an overall humbling relic of community. 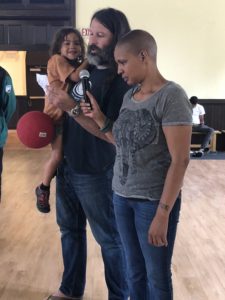 The workshops were very refreshing and powerful. Everyone knows that racism, injustice, and social inequality cannot be solved with a fifteen minute writing exercise or a snowball fight with pieces of paper and index cards. But I was constantly humbled by people’s willingness to be vulnerable. Writing, music, art, race — these are not easy spaces to share with others. And to speak truthfully in front of your neighbors takes a lot of courage.

It’s encouraging to see people across a spectrum attend this; from people who are constantly thinking about and organizing around race such as the PCM steering group members, to Miles and Ursula, to children who might have only been exposed to race through having one or a few black or white family members.

There was a general sense in the room that this was pebble on an uphill rock statue of working towards racial justice. Before we have justice, we must have space. We must have conversation. We must have food and laughter and music. Huge thank you to Maleka, Miles, Ursula, PCM, the Waldorf School and everyone who attended and participated in these sessions for making this possible.